Mark Frilot took medicines to treat what he thought for several days was a case of the flu, but he just couldn’t turn the corner. 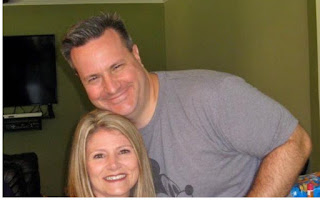 His fever was spiking nightly. At one point, his wife, Heaven, found him on the edge of their tub talking to himself, delirious.


When he went to East Jefferson General Hospital on Thursday, the staff diagnosed him with double pneumonia and the new coronavirus. Since then the Kenner lawyer has been sedated and attached to a breathing machine as doctors help him fight the potentially deadly respiratory disease that has caused a worldwide pandemic.
Heaven Frilot said Sunday she could hardly believe it. Her husband is 45, a construction litigator who is “never, ever sick.” But now, after seeing images of huge groups partying in New Orleans on Saturday despite the state’s request for people to practice “social distancing,” she is speaking up, hoping her family’s experience can serve as a warning for those who underestimate the risks of COVID-19.

“It could happen to anybody,” Heaven Frilot said. “That’s all I’m trying to say.”

Mark Frilot first noticed his temperature was a little high March 6: about 99 degrees. Heaven Frilot jokingly called him “a wuss” when he mentioned it. It would be three more days before the state would announce Louisiana's first case of COVID-19, which has inflicted its most severe damage on the elderly.


But when he stayed in bed all day March 7 and still hadn’t improved the next day, he went to an urgent care clinic. There, doctors diagnosed him with the flu and prescribed him Tamiflu, the steroid prednisone and codeine cough syrup.


Heaven Frilot said her husband immediately started taking the medications, but he got worse. When his nightly fevers wouldn’t break, though he was alternating Tylenol and Advil, he called the doctor back. He was told that sometimes happens while on Tamiflu and to continue his treatment.

Then came the bathtub episode.

When the Frilots checked Mark into the ER the next day, they were astounded when staffers informed him a flu test had come back negative. Heaven Frilot said she asked the hospital to get her husband’s paperwork faxed over from the urgent care clinic. When the documents arrived, they showed he had been found negative for the flu there as well, despite the treatment plan he was given.

“I was outraged,” said Heaven Frilot, who declined to identify the urgent care clinic. “How does it happen?”

An infectious disease doctor then spoke with the couple and said Mark was a candidate to receive one of the COVID-19 tests that have been so difficult to get, even for patients sick with fever and other symptoms of the disease.

The hospital ran the test and, after several hours, it came back positive.

Heaven Frilot said the days since then have been a blur. Stricken with both COVID-19 and double pneumonia, Mark Frilot is in critical care and isolation. He consented to being given a paralytic drug, sedated and put on a ventilator, she said.

Essentially, the machine is breathing for him so his lungs can rest, Heaven Frilot said Sunday.

Meanwhile, she has been in self-quarantine with her son. They both had run low-grade fevers by Wednesday. But, as an oil and gas consultant, she works from home. Her son had gone to school a couple of days early last week after testing negative for the flu.


She notified her son’s school, St. Martin’s Episcopal in Metairie, about his father’s diagnosis. St. Martin's, which is closed until at least next month along with the rest of the state's schools, sent an email to its community members informing them.


The U.S. Centers for Disease Control began calling people with whom they had been in close contact.

“I feel horrible. He was misdiagnosed, and I never would’ve put anyone else in jeopardy had I known what he had,” Heaven Frilot said.

The state simply told them that, during their quarantine, they should monitor the fevers they each had developed in the days leading up to Mark Frilot's positive COVID-19 test.

Heaven Frilot said she was horrified at the images trickling over her social media feed Saturday.

Despite officials’ pleas to avoid forming large crowds because COVID-19 is highly contagious, people flocked to a St. Patrick’s Day block party at a Magazine Street bar and to watering holes on Bourbon Street. Police arrived at both scenes to disperse the crowds, who Mayor LaToya Cantrell said were endangering public health.


There were 103 positive cases of COVID-19 in Louisiana as of Sunday evening, the vast majority of which were in the metro New Orleans area. Two people with unspecified underlying health conditions — ages 58 and 53 — had died.


Some critics of the city’s actions said people who are low-risk shouldn’t be restricted, even though experts say young people who have no symptoms may still be causing a substantial number of infections.


Heaven Frilot said a doctor treating her husband expressed his suspicion that the disease was circulating here before the first cases were diagnosed — longer than medical professionals realized.


“A lot of people don’t get to this point — their body fights it off,” said Heaven Frilot, who expressed confidence in the hospital’s treatment plan for her husband. “But not everybody.”


She pleaded with people who think they are too healthy to be at risk to be aware that they still could be in danger and to listen to city leaders’ requests — if not to protect themselves, then for the sake of those who are vulnerable.


“Be aware,” Frilot said. “Please listen. So what if you have to stay home? This is a temporary thing — or hopefully (it will be), if people listen.”