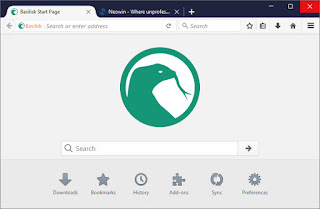 Basilisk is a free and Open Source XUL-based web browser created by the developers of the Pale Moon browser. It is based on the Goanna layout and rendering engine (a fork of Gecko) and builds on the Unified XUL Platform (UXP), which in turn is a fork of the Mozilla code base without Servo or Rust.

Basilisk as an application is primarily a vessel for development of the XUL platform it builds upon, and additionally a potential replacement for Firefox to retain the use of Firefox Extensions. It aims to retain useful technologies that its sibling Firefox has removed.

Requires Windows 7 or later. Windows XP or Windows Vista are not supported.