I have to say that I am really into the metallic shit we're seeing all over the place this year. I like shiny things. (Mind you, there's a lot of stuff out there labeled metallic that isn't metallic, but that's a rant for another day.)

I picked up this Maybelline Master Precise Metallic Liquid Liner recently in part because it's shiny, but also because the design of the packaging seemed similar to my long time favorite liquid liner, L'Oréal Lineur Intense Felt Tip. Since the latter seems to be gradually disappearing, it would be nice to have a similar option that's less expensive. (Lancôme offers the same thing, but it's obviously much more expensive.) The main appeals of this style of eyeliner are (1) felt tip, not brush tip, and (2) the lid is longer than the wand--meaning that you can grip the handle down near the tip for better control, rather than several inches higher like this. That control is vital!

Though there are several flashier colors of these metallic liners (teal! gold!), I know from experience that I rarely wear any eyeliner that isn't black or brown, and I already have a whole collection of eyeliner pencils in other colors in case I really need to go there. So I gambled on the shade Galactic Metal. Since I was ordering online, and the name isn't very descriptive, I expected a sort of dark gunmetal. That's more or less what it is, though when you look closely it's more of a black base with silvery iridescent shimmer. Look at all the colors in this macro shot: 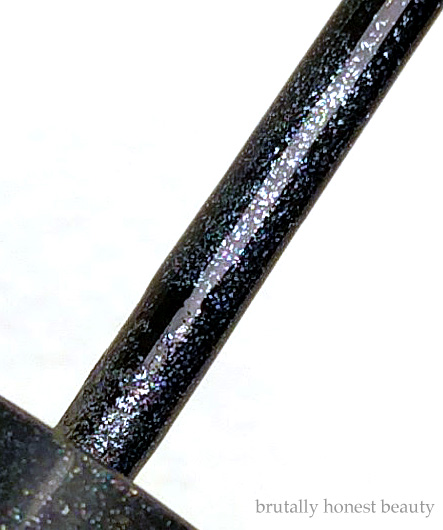 As for how this eyeliner performs, I'm quite happy with it. It's much better than the disastrous L'Oréal Carbon Black I tried a few months ago. "Master Precise" is a good name, in fact, both because of that long lid I mentioned that offers control, but also because the tip is super-mega-pointy. 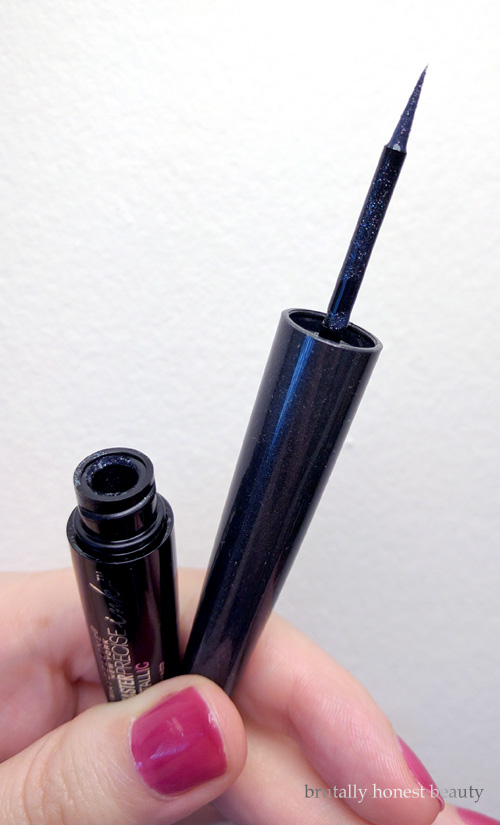 In fact, it was a bit too pointy for me. I had a hard time not stabbing the inner corner of my eye where I start my line, and I also like to dot liquid liner between my lashes to fill in the gaps (i.e. tightline). This tip was so sharp that trying to do that was torture.

No problem, though. I just took a pair of (clean) nail scissors and snipped about a millimeter off of the tip. Now it's perfect for me. Maybe I can't get the end of my wing down to a micron, but that's not the kind of thing that's visible outside of a close-up photo anyway. 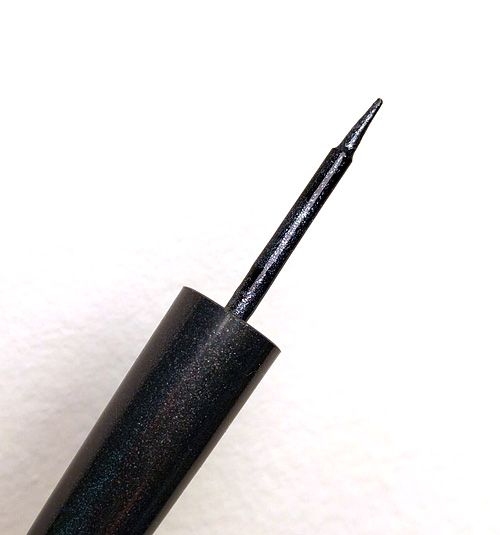 Here are some swatches in different types of lighting that I drew on the back of my hand before trimming the tip. You can get an idea of the shimmer and of just how thin a line you can draw with this eyeliner if you are so inclined. 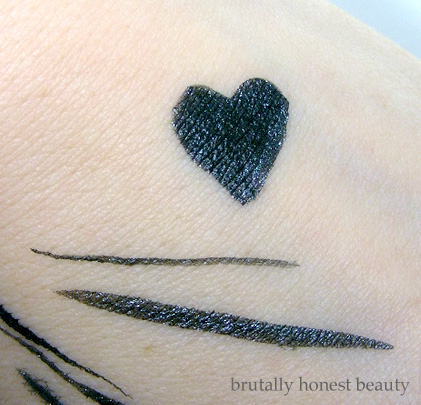 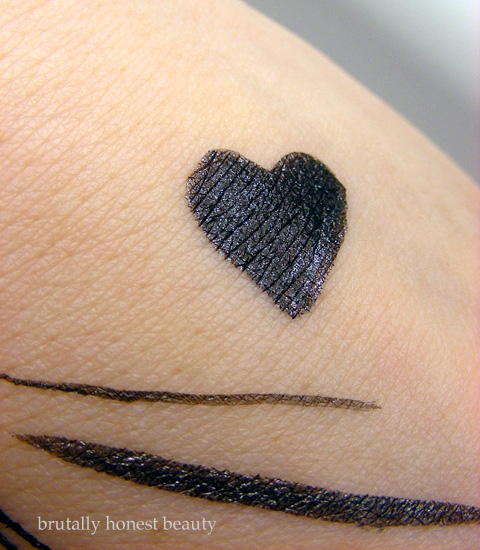 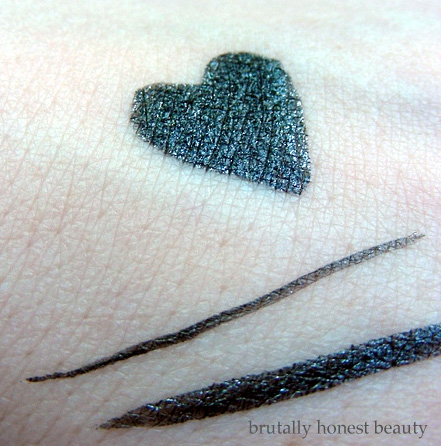 On your actual eyelid, Galactic Metal is going to read mostly as black, but with enough shimmer to make it interesting. I found it easy to apply in a smooth, opaque line. When you go back over the line, the original liner doesn't get picked up, as can happen with some products. You can keep drawing over it to get what you need. 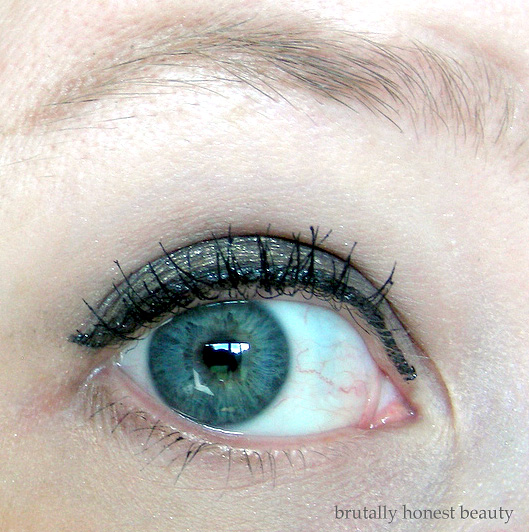 I applied the liner above after trimming the tip, so you can see that I probably could have got a thinner line at the inner corner if I hadn't done that (but, like I said, the stabbing!). I'm sure I could have made it thinner after trimming too, if I cared to, but that's not the kind of detail that is visible in person--certainly not behind my glasses. (Any flakes you see here are from my Maybelline mascara, briefly reviewed here, not from the eyeliner.)

This is the kind of formula that dries to a sort of plasticky film that you can almost peel off at the end of the day. It comes off in big chunks when you remove it. The advantage is that I've found it to be both water and oil resistant, which is unusual--often oil easily melts a waterproof formula and vice versa.

Here it is about 7 hours later (in worse indoor lighting). Not perfect, I guess, but in pretty damned great shape. My concealer, on the other hand, did not survive as well. 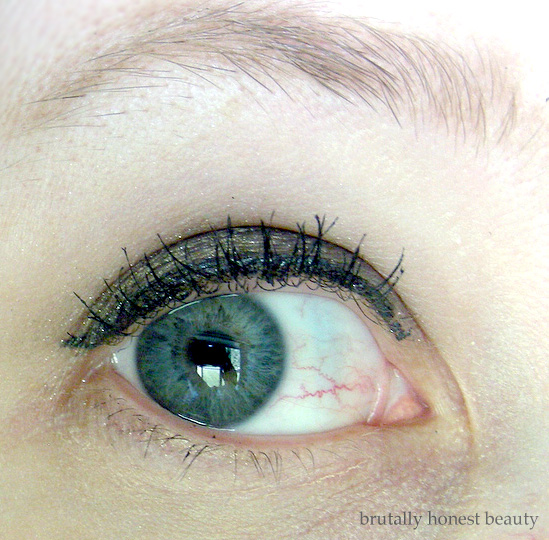 All in all, I'm quite pleased with this eyeliner and have no reservations about recommending it. It gives me a fun (shiny!!) option for my everyday makeup.

I'm curious now about the colors I didn't buy. Is it possible that the gold, for instance, could be as opaque and easy to use as this one? It's not uncommon for performance to vary by shade (again I remind you of my awful L'Oréal Carbon Black experience). Has anyone tried the other colors in this line? I'm not sure they're in stores yet--you might have to get them on Amazon or Ulta, like the corresponding metallic lipsticks. (I keep stalking the Ulta website to see if the lipstick is in stock in my local stores, because I bought the wrong color online and want to exchange it, but so far no luck.)